Book Review: Babel: The Story of the Tower and the Rebellion of Man (The Fall of Man Book 3) 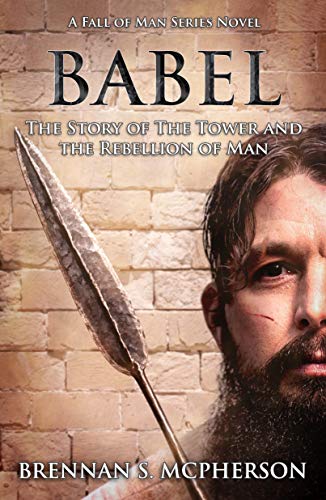 I received a free pdf copy of this book available on Kindle as well as paperback. The author requested a review. So I need to first say that I only made it about a quarter of the way through the book (totaling 378 pages as a pdf file).

The premise of the book was interesting. The story is about the Tower of Babel, and the author points out that Noah was still alive at the time the Tower was built. The author questions why Noah did not have more positive influence over the people who built the Tower, a mere 300 years after the Flood.

While the idea of a story about Noah’s descendants who build the Tower of Babel while Noah is still alive is indeed interesting, I myself just couldn’t engage with the story line. I consider myself a fan of historical fiction, and I understand that the fiction part is developed while supported by historical fact. I found little historical fact that carried the story forward for me. Here’s some examples.

First, and to me most importantly, I was led to believe that this book was Christian historical fiction. Noah is often referred to as a “prophet of the Almighty.” Christianity does not refer to Noah as a prophet – but Islam does. There are times within the book when “the Almighty” appears or speaks to Noah in a vision. But there are also times when Noah “consults with” the Almighty. That makes him sound more like an oracle than a prophet.

Ham, who in the biblical story sees his father Noah sleeping drunk and naked, has a serious disdain for Noah because he loved the Almighty more than Ham. The Light Bringer contacts Ham while still on the Ark and Ham denies the Almighty and begins to follow the Light Bringer along with all of his family members.

Speaking of family members, everyone alive at this point are direct descendants of Noah, yet some people are “workers” and some are slaves without any indication of how family members were enslaving one another. For example, after all the family members finish saying goodbye to Noah’s dead wife (Jade), the “workers” fill the grave with dirt. Weren’t they also family members?

Historical fiction needs to reflect history accurately and that includes topography. Noah is said to be living at the base of Mount Ararat. All the available water has been tainted by the Flood, which apparently occurred over 100 years before this story begins. Would there not be fresh water streaming down from the mountain by this time? The tainted water is given as the reason why Noah is drinking wine and getting drunk (albeit also as he suffers from the death of his wife).

The author also doesn’t seem to take the weather into consideration around Mount Ararat. Noah gets up in the morning and is harvesting grapes. Yet while he is walking, he is sweating profusely. Grapes would be ready to eat/harvest in late September in eastern Turkey – not exactly a time that would bring up a sweat in the morning.

Noah’s sons carry their mother on a mat made of bamboo. While there is a type of bamboo that grows in eastern Turkey, it would not be growing in the area around Mount Ararat and there’s no indication that it was strong enough to make mats (since it’s really a type of flax).

One other topography concern. The book implies that a servant traveled to Noah’s vineyard from near Babel (modern day Babylon). Noah then travels back with the servant to visit his sons Shem and Japheth who are living in that area. While Mount Ararat is directly north of Babylon, it’s over 1,000 kilometers to the north. Yet the book says they cover than distance in two weeks; that’s about 50 miles a day and would have more likely taken four to five weeks.

With this many historical errors involved in the story line I just couldn’t find it in me to finish the book. It became too much of a chore reading about Ham and Nimrod being possessed by the spirit of the Light Bringer to enjoy it.

Posted by discipling4life on January 4, 2020 in Uncategorized.