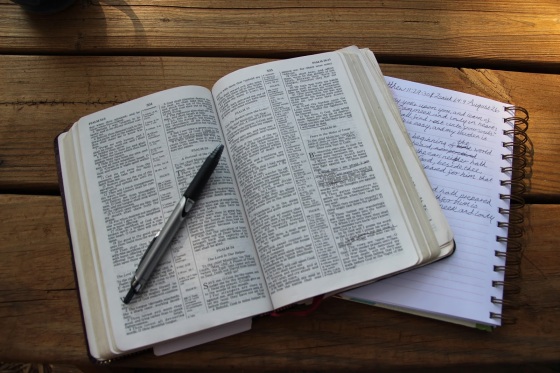 This is an easy method that you can use to study any book of the New Testament one chapter at a time. We call it the ABC Study, although we use the letters A B C D E and sometimes F.

Choose a New Testament book, for yourself or as a group. If you, or several people in a group, are new to a chapter analysis method, begin with a short book like one of Paul’s shorter epistles (for example, Colossians or Philippians) or one of the “general epistles” (like 1 John or 1 Peter). It may be difficult to begin with a longer letter of Paul’s (like Romans or 1 Corinthians), Hebrews, or Revelation. Also, do not try to begin with letters written to individuals, like Philemon, Timothy and Titus; save those for later. Chapter analysis can be done using a gospel, but because the writing style is different, it’s best to choose one of those after you have completed several of the letter-style books.

Once you have chosen a book to study, spend the first week doing a background study of the book. Who wrote the book, and who did he write it to? When was the book written? For books that are written to Christians in a specific city, what do we know about the city and it’s people? What was the culture of the people? Do not assume culture based on where the city is today (while Corinth was located in modern day Greece, the people that populated the city when it was re-built were Roman soldiers and freedmen from other locations). For the general letters, it is much more difficult to know specific details about who the recipients were. Doing some of this background can help you better understand what the people were going through when person wrote to them.

After a short background investigation, it’s time to begin your study. First, listen to the whole letter in one sitting. After all, that’s how the first people “read” these letters. Someone brought the letter to the city, was welcomed into the church meeting place, and the letter was read entirely to the people. It’s thought that after the letter was read, people may have had time to ask questions, based on what they heard. Listening to the letter allows you to pick up on the primary points of the letter without getting lost in the details. It’s a good idea to listen to the letter from at least three different translations of the Bible. While you listen to the letter, joy down major thoughts as you hear them.

Once you have listened to the letter, begin to develop an outline of the whole letter. This helps you later consider the letter as a whole, rather than just a chapter or smaller section. Finish your background investigation by identifying the reason the author wrote the letter. Was there a specific problem being addressed? Was he responding to questions from the church (this happens with the Corinthian letters). Knowing the reason for the letter, at least generally, will help you stay on track and not take small verses out of context (like what happens when we consider Philippians 4:13 by itself rather than by what Paul wrote in several verses before).

Now that you have the background and understand the primary purpose of the letter, it’s time to begin to look at each chapter individually, but remember that there were no chapters (or verses) when the letter was written. Sometimes a thought continues into the next chapter. You may have identified those areas as you listened or read through the whole letter.

As we follow the letters of the alphabet for our ABC study, we begin with A Title. Simply title the chapter in a way that helps you know the primary idea in that chapter. Many Bible already have chapter or section titles in bold print. (To avoid being swayed by publisher titles, I print out the chapter from Bible Gateway and I remove all the titles and reference notes so that my printed page is clean, just like the original letter would have been—only in English!)

The next step is to choose a Best Verse or Basic Passage. Decide for yourself which verse is best to you from the chapter, or perhaps a couple verses or short paragraph sums up the main thought into a nutshell. Sometimes, as you listen and read through the chapter, you find a common word used several times that helps you identify the main thought and leads to the best verse or basic pssgae. If you share your study with others in a small group or one-to-one meeting, you will quickly realize that people may choose different verses in this section, and that’s okay. It’s been a rare evening in our group when everyone chooses the exact same best verse or basic passage.

The third step is to decide the Challenge from this chapter. This comes down to how you can apply what you have learned from this chapter study to your personal life. The challenge might be from the best verse or basic passage that you already chose, or it can come from a different part as the Holy Spirit convicts you about another thought within the chapter. In our small group, we rarely have the same challenge.

Difficulties are next. Every time we read the Bible, something will come along that we do not quite understand. Make a list of any difficulties that you encountered as you studied this chapter. In some cases, you will be able to figure out from a Bible dictionary or a commentary a reasonable response to a difficulty. However, sometimes you might just be stuck, unable to determine what something means or how it might work. This section of our study is probably the most useful in a small group. Other people may have the same difficulty. As you share what you learned as you investigated that issue, you will be helping others. And they may have found an answer that you did not consider.

The E in our study method is for Essence. As we complete our study of the chapter, we want to summarize the chapter in no more than three sentences (a small paragraph). Using some of the specific terms found in the chapter, put those terms into an understandable sentence. It may help you develop the essence to think about what you would say if you were asked, “What is the second chapter of Ephesians about?”

Most people who do an ABC study stop at Essense, but our group recently decided to add F for Fix your investigations (FYI – it was the best we could come up with). We decided that there were certain verses worth memorizing; perhaps what we choose as the Best Verse, perhaps another. We do not feel compelled to memorize a verse from every chapter, however Martin Luther said that best thing we could do as Christians is memorize the entire book of Romans! Because of the timing of the study work and our meeting, we often identify a verse to memorize and work on it over the next week.

That’s the ABC study. If you need more help (which means I didn’t do a very good job encapsulating here), you can find more in The Navigator Bible Study Handbook. Let me know how it goes!