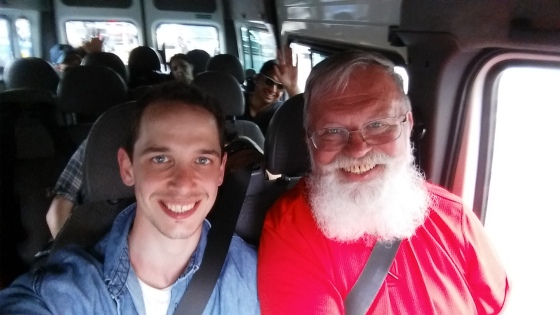 In another posting, I mentioned that I was able to attend an evening service at The Metropolitan Tabernacle in London and met Mark there. Mark and I hit it off very quickly and the next day we went with the church for their annual holiday outing in Essex, a little over an hour’s drive to the east of Central London.

Mark quit school and left home when he was 16 years old. He mentioned by that time he had a number of addictions. His mother raised him and his brother as Catholics, but he had no faith by the time he left home.

Five years ago, Mark’s brother began to follow Jesus and began to talk with Mark about it as well. Mark began to attend a Hillsong church in London and was eventually exposed to the sermons of Mark Chandler in Dallas. Through these messages, Mark turned in faith to Christ, and eventually left Hillsong for the Tabernacle. He met his wife a year later and they will have been married for a year in July 2018.

As we talked together, it was clear that Mark was struggling in his relationship with his parents. He had shared the gospel with his mother (without her asking) and she would no longer talk with him about religion. His father had been estranged for ten years and at the present time Mark doesn’t even know how to contact his father. There was obvious pain in this conversation.

Mark’s outward life has significantly changed. His addictions have been turned over to Christ and he’s experiencing victory. He reads his Bible daily and shares his faith before the weekly evening service (sharing his faith at work is a different matter though). His relationship with his wife (Wara, from Boliva) is growing along with her extended family. His relationship with his parents, however, is an area that haunts him often.

Mark and I were able to spend several hours talking about how a Christian son can nurture his relationship with non-Christian parents. I gave him several ideas to implement. And, unsurprisingly, our relationship grew deeply quickly—a spiritual father and son relationship.

We will continue to Web talk and email one another over the next months, and I might be able to carve out a quick trip to visit him again in October 2018. Most of this relationship will be built on his need to relate well with his parents, but there are also areas of his Christian walk where he needs help. His church provides very good doctrinal teaching, but he expressed a need for personal mentoring in several areas.

What a joy to have a spiritual son “over the pond.” And to know that the mentoring gifts God has given me are useful there as well as here.

Posted by discipling4life on June 5, 2018 in Uncategorized.